Towards the end of the year 1917, the First World War, the war to end all wars, was to see the first large-scale effective use of tanks at the Battle of Cambrai (20 November 1917 – 7 December 1917) in France. Rittmeister Manfred Freiherr von Richthofen, the Red Baron, was just returning to command his flying circus after convalescent leave following a serious head wound, he received on 6 July 1917.

Lieutenant John Watson McCash of The Black Watch, attached to the Royal Flying Corps (RFC), was reported as missing in the Perthshire Advertiser on Wednesday 5 December 1917. He was the 24-year-old son of William F McCash (Grain Merchant, J McCash & Son) and Alice H McCash, Cornhill House, Jeanfield Road, Perth. Lieutenant McCash was the nephew of J B McCash, Solicitor, Perth. The firm of J. McCash & Sons of Dovecotland, Perth have been supplying animal feed since 1746.

John Watson McCash was educated at Clifton Bank School, St Andrews, and later the University of St Andrews. He studied civil engineering and worked for the Caledonian Railway Company in Perth. He enlisted in the Scottish Horse, a Yeomanry regiment of the British Army’s, Territorial Army. The Scottish Horse fought as the 13th Battalion of The Black Watch during the First World War. McCash was promoted to corporal and was commissioned in October 1913 into The Black Watch, 6th Battalion, as an officer. He was then attached in April 1917 to the RFC as a pilot serving with No. 3 Squadron of the RFC. At the time of his death was flying from an Advanced Landing Ground (ALG) at Bapaume.  In October of 1917, his squadron was equipped with Sopwith Camel aircraft which were just being introduced to the fighting on the Western Front in France.

On 20 November 1917, at dawn, approximately 6.20 am, the British launched an attack at Cambrai (Schlacht von Cambrai) in the département of the Nord, Hauts-de-France region. Six British infantry divisions led by 320 tanks created on the first day a hole in the German defences ten kilometres wide and six kilometres deep. The town of Cambrai was an important supply point for the German Hindenburg Line (Siegfriedstellung) and it’s capture along with the nearby Bourlon Ridge would threaten the rear of the German line to the North. The British infantry carried forward the momentum of the attack, they reached a point five kilometres from the Luftstreitkräfte (Imperial German Air Service) (Flying Circus) Jasta 11 base at Boistrancourt where they began shelling the airfield, the Jasta retreated to an improvised base at Valenciennes.

On 22 November 1917, the weather prevented flying except at extremely low height, but on 23 November, bitter air combat took place. Just after noon, Jasta 5 Flying Circus aircraft engaged Sopwith Camels over Bourlon Wood. Three Camels got on the tail of Jasta 5’s commander, Oberleutnant Richard Flasher, who was saved by the intervention of Vizefeldwebel, (Leutnant der Reserve), Fritz Rumey and Leutnant Otto Könnecke. Both pilots were reported to have shot down one Sopwith Camel each. In fact, only Fritz Rumey received credit for both.

The body of john Watson McCash was not found. He is commemorated at the Arras Flying Services Memorial (Commonwealth Graves Commission) which is in the Faubourg d’Amiens Cemetery, Arras, France. McCash is also remembered on the War memorial in the parish church at Tibbermuir and the book of remembrance at St Andrew’s University.

Second Lieutenant W F McCash, a son of Mr and Mrs McCash of Queen Street, Craigie, Perth, educated at Perth Academy and also a member of the firm of James McCash & Sons, Grain Merchants, was awarded in early 1917 the Military Cross. Lieutenant McCash was 29 years of age enlisted in the Black Watch at the start of the war. He had been at the front for eight months when he received his commission in the Gordon Highlanders. When he returned to the front he was severely wounded in November 1917. The Gordon Highlanders also took part in the Battle of Cambrai.

Rittmeister Manfred Freiherr von Richthofen was flying in his red Albatross D.V. above Bourlon Wood that day, about an hour later. He forced the pilot of a No. 64 Squadron, Airco D. H. 5 aircraft to make an emergency landing. His next victim was Lieutenant J A V Boddy flying D. H. 5, A9299, his gun had jammed, and he was trying to clear it when Richthofen’s red Albatross opened fire on him. A bullet fractured his skull but somehow, he manged to land his aircraft near the northeast corner of the wood, additionally breaking his thighs. Boddy recovered from his injuries, but his flying days were over. No. 64 Squadron lost six D.H. 5’s that day. None of the pilots were killed, but two were wounded.

The Royal Flying Corp losses for 23 November 1917 was 14 with 15 enemy aircraft claimed shot down.  In the air that day over Cambrai, were several other notable ‘Aces’, Manfred’s brother. Lothar Richtohfen, and Captain James T B McCudden, VC, DSO & Bar, MC & Bar, MM (57 victories). On the ground, Private Archie McMillan of the Argyll and Sutherland Highlanders was one of many thousands killed on the ground, he was a footballer with Glasgow Celtic.

The Royal Flying Corps was established in 1912, just three years after Louis Bleriot had flown across the English Channel. The RFC during 1914 and 1915 the recruits were mainly professional soldiers who had already seen some action in the trenches. By 1916, many of the new recruits were volunteers and those who were technically skilled railwaymen, such as John McCash were much favoured by the RFC.

On 26 July 1917, the Royal Prussian Jagdstaffel 11 squadron of the German air force, commonly known as Jasta 11 became part of Jagdgeschwader 1 (JG1). This was a wing of four Jastas under the newly arrived command of Rittmeister Manfred Freiherr von Richthofen, known as the ‘Red Baron’, (in German as the ‘Der Rote Kampfflieger’). Rittmeister Richthofen had just flown to Boistrancourt airfield, (French: Aérodrome de Boistrancourt-Suererie/German: Feldflugplatz Boistrancourt) 100 miles north-west of Paris to take charge of the newly combined Jasta’s operation.

Richthofen was severely wounded in the head on 6 July 1917 and returned to his command on 25 July 1917. JG1 were the first squadrons to receive the new Fokker DR.1 triplane, as famously associated with the Red Baron. The first two were received on 21 August 1917. The German Ace pilot, Werner Voss was perhaps the greatest exponent, scoring ten victories in just 21 days before he died in combat. Rittmeister Richthofen left on convalescence leave on 6 September, returning on 23 October 1917. Richthofen spent time hunting on the estate of the Duke of Saxe-Coburg-Gotha (German: Sachsen-Coburg und Gotha), visiting his family at Schweidnitz and going to Adlershof for more consultations about aircraft design. Adlershof was the headquarters of the German Experimental Institute for Aviation (Deutsche Versuchsanstalt für Luftfahrt – DVL). During Richthofen’s time away, several fatal crashes involving the new Fokker DR.1 saw it withdrawn for modifications until December 1917.

Fritz Rumey was a German ‘Ace’, credited at the time of his death with 45 victories. He was a holder of the Pour le Mérite (Blue Max) and the Goldenes Militär-Verdienstkreuz (Golden Military Merit Cross). He was only one of five pilots to receive both these awards. There are two accounts of Rumey’s death on 27 September 1918, that following a mid-air collision with a Royal Aircraft Factory S.E.5a of 32 Squadron flown by Captain G E B Lawson, his parachute failed to open, and he threw it away. The second account, that during a full throttle pursuit of the S.E.5, it caused the fabric to peel off from his upper wing and this caused his aircraft to fall from the sky and crash. Lawson survived and was awarded a DFC, Lawson later died in a flying accident in 1922. Parachutes were also used in limited numbers by the Germans in the last months of the war. Famously, Flying Circus ‘Ace’ Ernst Udet used one on 29 June 1918 following a mid-air crash with a French Breguet aircraft.

Leutnant Otto Könnecke survived the war, he died 25 January 1956, age 64. During the Great War he received the Pour le Mérite (Blue Max), the Goldenes Militär-Verdienstkreuz, Knight’s Cross with Swords of the Royal House Order of Hohenzollern and the Iron Cross. His tally was 35 victories.

Manfred von Richthofen’s death was to come on 21 April 1918 when he was killed following an attack by the Canadian, Captain Arthur “Roy” Brown (23 December 1893 – 9 March 1944) in his Sopwith Camel. Brown died of a heart attack just after posing for a photograph with the current WW2 Canadian flying ace, George Frederick “Buzz” Beurling (known as “The Falcon of Malta” and the “Knight of Malta”). Cedric Bassett Popkin (20 June 1890 – 26 January 1968) is considered the likely person to have killed Richthofen. Popkin was an anti-aircraft (AA) machine gunner with the First Australian Imperial Force (AIF).

At the Battle of Cambrai, the German artillery and infantry defences exposed the frailties of the Mark IV tank. By the second day of the battle only half the tanks were still operational. The Sopwith Camel first appeared over the third Battle of Ypres (also known as Passchendaele, 31 July 1917 – 10 November 1917), it lasted over 100 days. In that time, the Allies advanced about 5 miles for the loss of over 250,000 soldiers killed, wounded or missing. The Sopwith Camel with its outstanding manoeuvrability made it deadly in the hands of a good pilot. It dominated the skies over the trenches and became the RFC/RAF’s main fighter until the Armistice, on the 11th hour of the 11th day of November 1918. 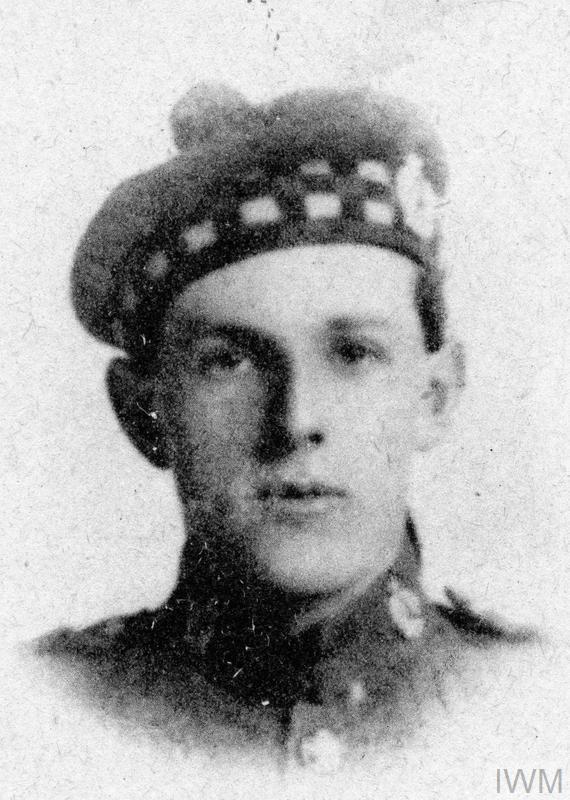 THE BATTLE OF CAMBRAI, NOVEMBER-DECEMBER 1917 (Q 88138) Captured British tank (I36) being transported on a German railway waggon. The tank was recovered by the German 2nd Anti-Aircraft Company (Kompanie-Flak 2) between Anneux and Graincourt-les-Havrincourt on 12 December 1917.
The tank was very likely abandonded by its crew during the Battle of Cambrai and recovered by the Germans after the battle. Copyright: © IWM. Original Source: http://www.iwm.org.uk/collections/item/object/205081388 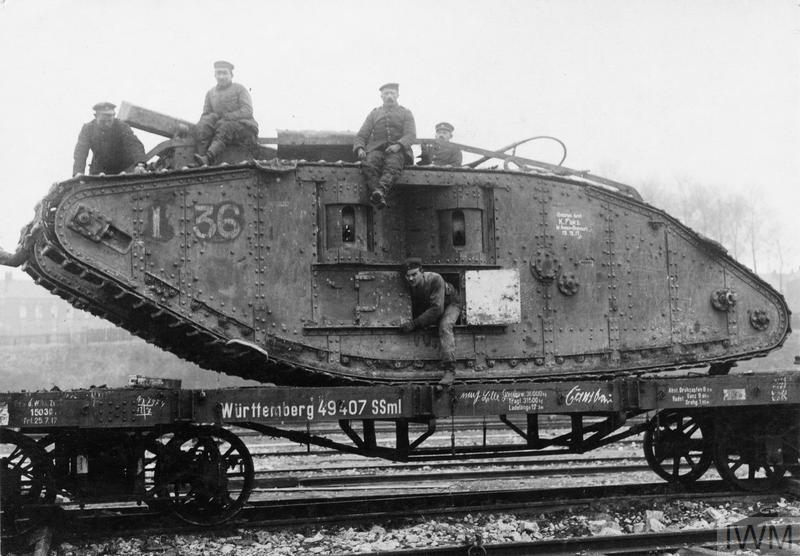 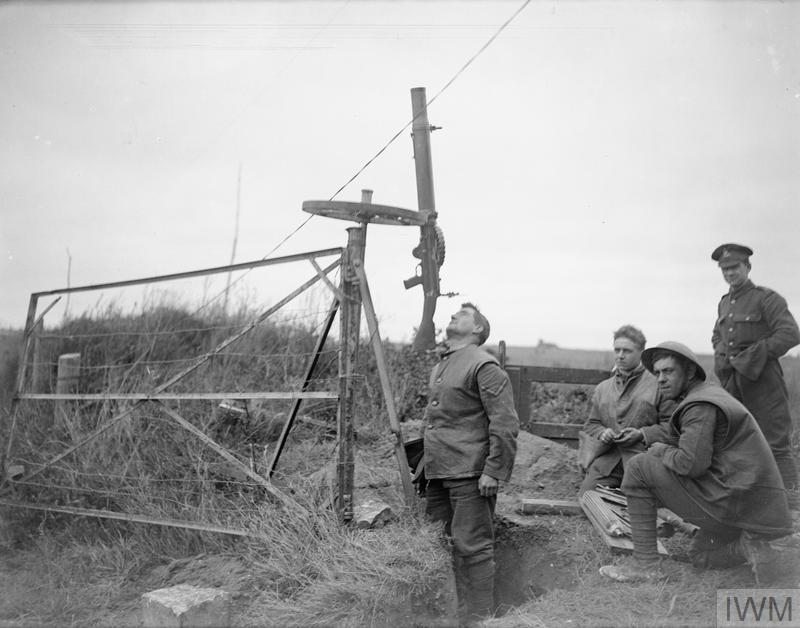 THE ROYAL FLYING CORPS IN THE FIRST WORLD WAR (Q 67829) ‘Rules of the air – meeting another machine’. Air technical diagram of a Sopwith Dolphin and two Sopwith Camel biplanes meeting in the air and turn to the right. Copyright: © IWM. Original Source: http://www.iwm.org.uk/collections/item/object/205315035 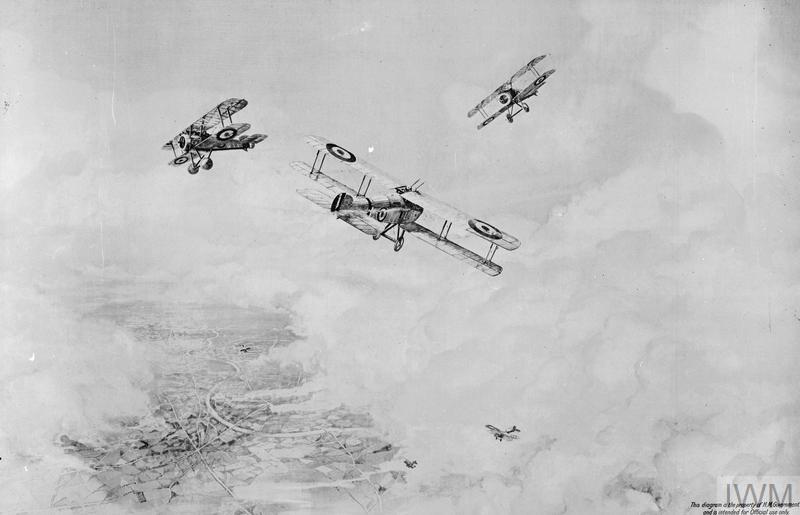 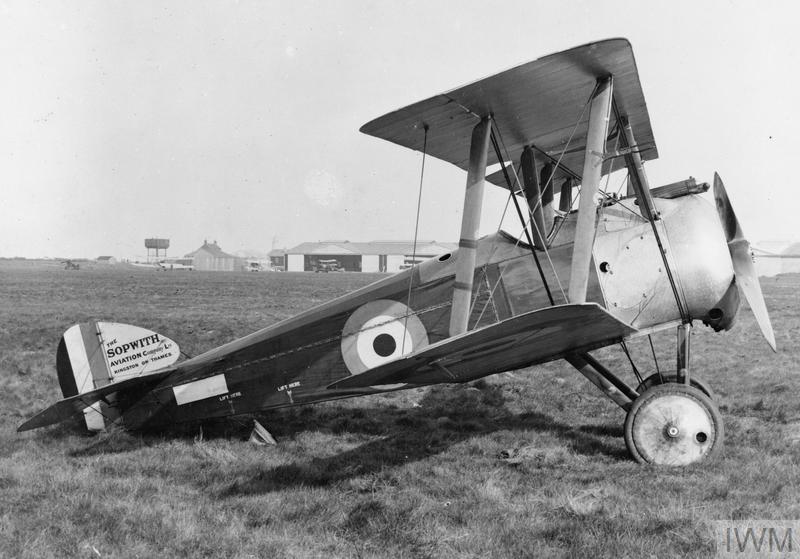 Fritz Rummey, This image is in the public domain in its country of origin and other countries and areas where the copyright term is the author’s life plus 70 years or fewer. 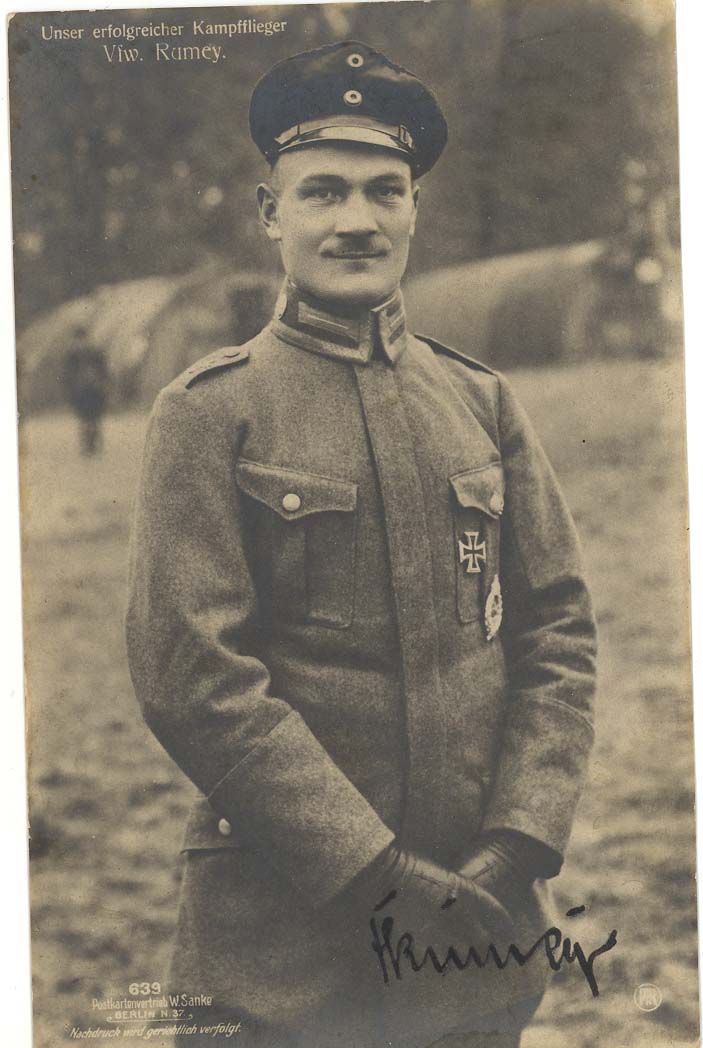 ACES OF THE FIRST WORLD WAR AND THEIR AIRCRAFT (Q 107381) Formal half-length portrait of newly-promoted Rittmeister Manfred von Richthofen wearing the Pour le Merité (‘The Blue Max’) awarded to him by Kaiser Wilhelm I on 1 May 1917. Richthofen took command of Jagdgeschwader 1 the following month. Copyright: © IWM. Original Source: http://www.iwm.org.uk/collections/item/object/205021567 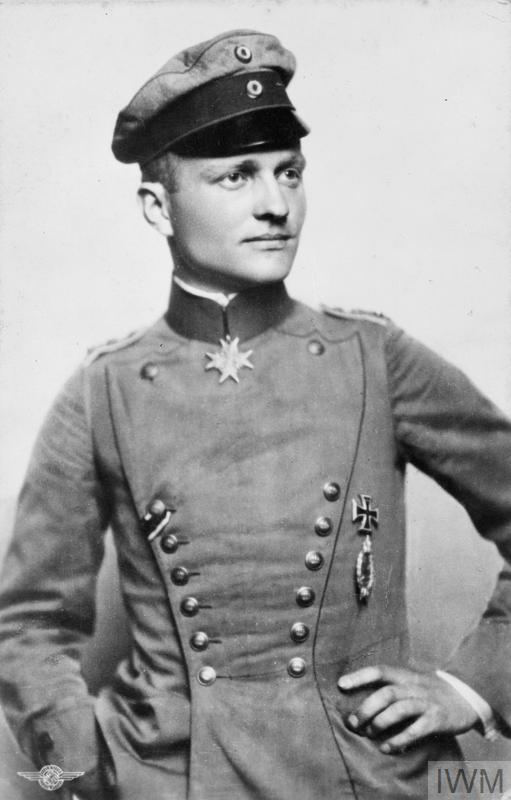 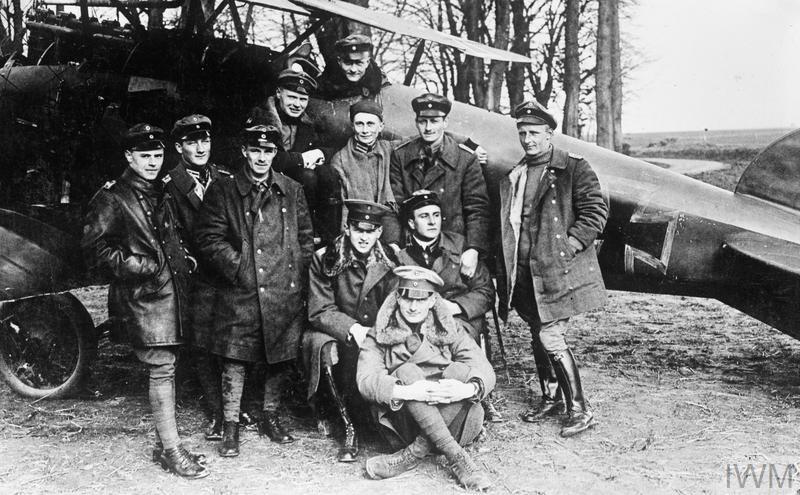